This morning we are sitting under what's left of Tropical Storm Lee - the first rain in more than a month here in Chattanooga.  I thought it might be a good time to post some about the weekend.

We went to Lexington KY this weekend for the Labor Day shows.  Heidi headed up first, picked up one of my EZ-up tents which Cheryl M transported for us, and she single handedly got a great spot and PUT THE TENT UP ALL BY HERSELF!  Seriously folks, this is not an easy thing to do!  Laura and I arrived the next day and brought another tent, more x pens and a generator in the Cardi Party Wagon.  Kathy brought a third tent on Friday morning, and Cardi Camp was built.

We had set up a big Cardi play area with three xpens before Kathy got there, and after we got her tent up, we set about to move the xpens and cardis under the tent.  I wish someone had gotten this on tape, because it was a sight to see.  With all the dogs in the pens, all the humans lifted the xpens just off the ground and we started moving to the tent.  The dogs figured out right away what we were doing, and the herd easily moved across the field to the tent!  Here's a short video of all the dogs in the pen on Saturday morning:

On Friday, brother David from the Ocho came to visit - look at how handsome he is! 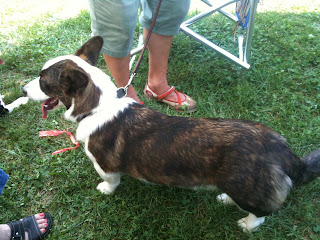 And here's a pic of pretty sister Ginger: 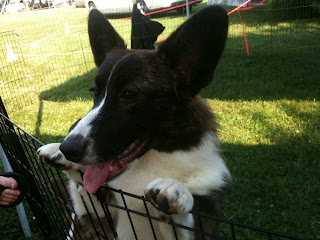 Saturday was a supported show and sweepstakes.  Sis Lowri was the star, winning Best in Sweeps and Winners Bitch.  Later she won Puppy Group 2 as well. Laura's Rosie was reserve after being WB on Friday.   Brother Tommy was Best of Opposite in Sweeps.  Sister Ginger showed well, and Sister Sally - well, she showed up.  Let's just say that Sally and Mama Scout made it perfectly clear - they don't like heat or outdoor shows, and that's all we are going to say about that.  Heidi's Rush was BOB and went on to a Group 3 (and a Group 4 on Sunday!).

We had a pot luck lunch planned after the show on Saturday, but it was so blazingly hot (100+ temp), it was not a great day to hang out and enjoy.  We had a bunch of great folks there, but it was just too awful to spend much time outside.  As we were huddled under our little spot of shade, we heard a call for medical personnel over the loud speaker.  Later we learned that an Obedience Judge had collapsed.  We hear the Lexington Club has the opportunity to move this show to a new indoor venue, but apparently some of the club's "old guard" is resisting it.  Hopefully after this year, they will re-consider.

On Sunday, we loaded up the wagon and headed home - here's how Spencer spent the ride home - perched in his "special boy" seat: 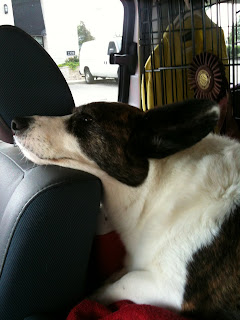 We are glad to be home!