This morning, Scout, Sally and I went down to Georgia to see baby-daddy Chase do his herding thing. (BTW - he was Reserve High in Trial for his second Started leg!) Sister Lowri, Kearney and Treasure were all there too.

There was a fenced in pen where we let the girls have a muddy romp before we got back on the road home. Here they are doing what sisters do: 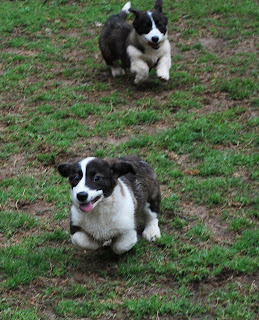 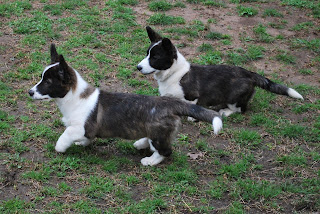 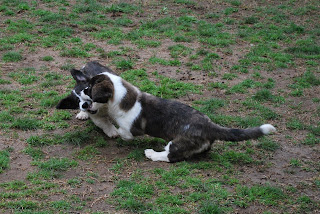 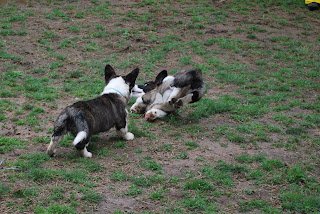 I retaped Sally's ears today - and she is none too happy about it.  This was my first attempt at shooting video on my iPad - looks like I should have turned it landscape-wise.

Sally doesn't put up much of a fight

Scout and Sally have tug, and the baby decides her best plan is to let Mama have her way.

Every new beginning comes from some other beginning's end

Can you name that one-hit-wonder song? 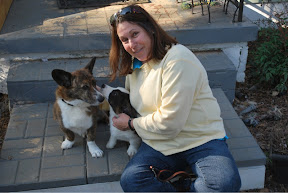 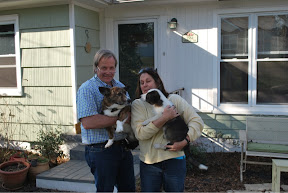 And tonight I came home and faced my new reality: 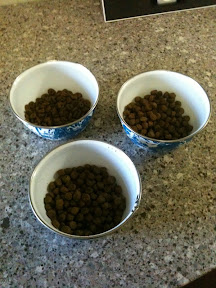 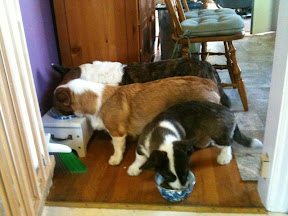 So now we settle into our routines. With the exception of some scary days in December, I can definitely say that my first foray into being a breeder was less work and more fun than I ever could have imagined. It was such a gift to watch my girl Scout be such a good mama after that scary start. I am so happy that seven happy, healthy pups are out there with their wonderful families, and that one sweet girl is chewing on Spencer's head at my feet as I type this.

David heads home tomorrow, and we are all going to miss him. David was the first puppy that Spencer would have anything to do with. David charmed him by snuggling up to him and cleaning his ears. David and Spencer love to wrassle with each other now. Of course, he and Sally are inseparable, being the last two together, and I know she will miss her buddy.

I call David the Fun Police - see how he fusses at Scout and Spencer whenever they start frapping. Warning - this is a noisy video!

I took the tape off Sally's ears tonight - hopefully she can do the rest of the work on her own - we'll give her couple of days to see. Also - look back in the puppy pen and see the work that Sally and David have been doing to remove the vinyl from the floor.

Two in One Day!

Lowri and brother Kearney now have their own blog too! Add another to your blogroll!
Posted by Janet at 10:02 PM No comments:

Big Nick is on the internets

Be sure to add Big Nick to your blogroll!
Posted by Janet at 4:45 PM 1 comment:

I had a local photographer come over and take pictures of the Ocho when they were 8 weeks old.  She has just posted a bunch of the pictures on her blog.  If you need a dose of virtual puppy breath, click here. 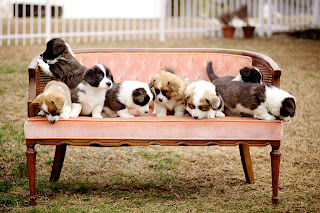 Today Sally went to her first dog show.  We got up early this morning to head a couple of hours west to the Cardigan supported show in Franklin, TN.  I wanted to go see some of our cardi friends and thought it would be a good chance for Sally to experience the sights and sounds of dog show.  Coincidentally, five years ago I went to this show and brought home a little red girl named Yum-Yum.

As Sally and I were headed out the door this morning, Spencer gave me a look like, "Don't I get to go too??"  I said what the heck, having a friend along for the ride would be good for Sally, so I loaded Spence and Sally in the crate and off we went.

When we got to the showsite, I used a coupler and leash and the two of them marched in like they have been doing this forever.  Sally got to meet lots of new people and loved all the attention.  After judging and lunch, the cardi folks were going to have short educational session (a new requirement for supported shows, apparently) and the topic was very timely for us - "Taping Puppy Ears."  Guess who got to be star of the show??

Sue and Brenda got her all taped up - and I think she is very proud of her new crown. 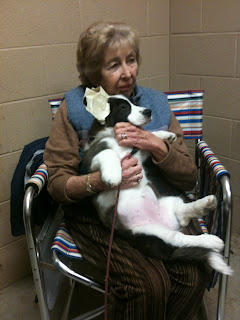 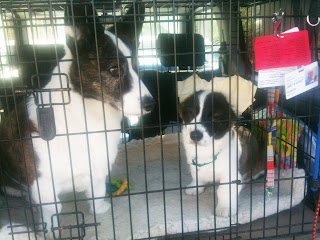 News from the Ocho:

First from the over-achievers:
And from those recently settling into new homes:

And back here our house, Sally and David have completely charmed Uncle Grump.  They have him figured out and love to mess with him.  Scout loves playing zoomies with them too.  David has perfect cardi ears now - and Sally has perfect beagle ears.  I think the little princess is set on having her very own duct tape crown.

Nick has left the building

Yesterday, Nick got to meet his new boy Joey: 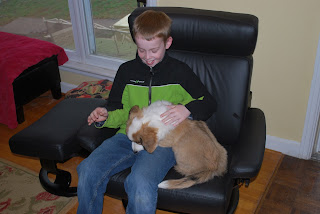 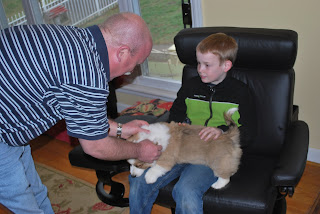 Liz and her men swept into town yesterday to escort Nick to his new life in Virginia. I hear that there will be a new blog coming to keep us up to date on his adventures. Meanwhile, Sally and David make do with a substitute red pillow. 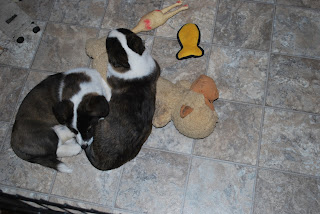 Is this week over yet??

This has been a week I will be glad to see in my rearview mirror.  I generally try to keep my blog to the happy things that go on in my life, but this has been one of those weeks that make me want to run away and sell t-shirts on the beach.

Early this afternoon, I pulled up the puppy-cam on my phone, and was a little surprised when the picture was of the wall and the bottom of the table where the webcam normally sits.  This meant that the table had been hit and the camera was knocked off and hanging by its cord.  I txt'd Liz to ask her if she knew how long it been like that - she txt'd back that it had been fine at 11:30.  I didn't worry too much about it and forgot about it until I opened the front door and was rushed not just by Spencer and Scout, but also the Three Amigos.

And then I saw this: 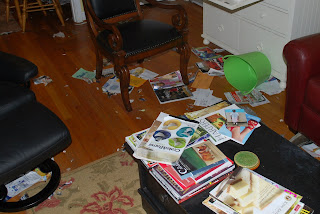 The scene of the crime: 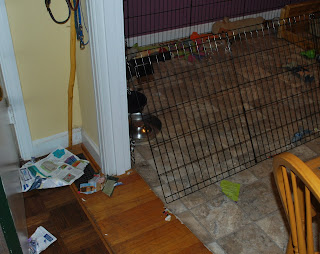 Was it a beaver?? 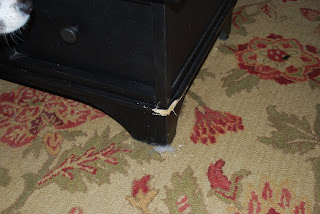 And in the kitchen - which was only accessible to little dogs who could shimmy under the gate. Someone decided to gain access to the used litter I was too lazy to haul to the trash this morning. I think the little puddle of pee on the bag is a nice touch - don't you?? 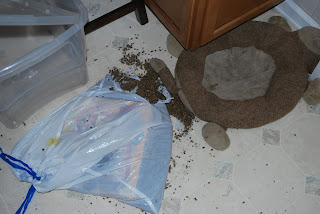 I brought the pups back in and after dinner they collapsed into this incredibly sweet puppy pile - it is out of exhaustion or a desparate attempt to curry favor?? 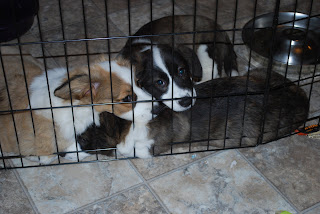 So - the great unanswered question - who grew thumbs and got the pen open? Was it Uncle Grump Spencer who has decided he likes playing with the pups and has a history of springing their mother from her crate when she was about their age??

Or was it a certain pup we know has developed a taste for wood products?? Hmmmm, I guess if it never happens again after a certain someone leaves tomorrow - we'll have our suspicions!

P.S.  I am secretly happy about the coffee table chewing.  I decided this week I wanted a new, smaller and round coffee table - this behemoth just takes up too much room in my tiny little living room, but I couldn't see getting rid of a perfectly good piece of furniture - problem solved!!
Posted by Janet at 7:41 PM 12 comments:

Liz, Come Get Your Dog

I was piddling around the house this morning, and I heard a strange sound. My first thought: Do I have rats? 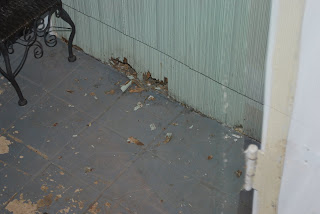 No, I have Nick. But only for a couple more days. 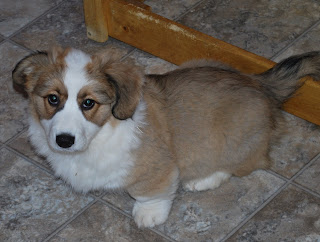 Yes - he was eating my house.  And when I scooped him up and put him back in his pen, he peed in the frisbee.  I think he was trying to make a point.
Posted by Janet at 7:20 AM 11 comments: