Coming up with an invention that no one else have ever thought about? About designing, testing and perfecting it, then figuring out how to get the little widget produced, packaged, marketed, sold and shipped?

I do this from time to time. Actually, on our trip back from Memphis, Laura and I came up with an idea that we are going to pitch to Jeri since we know she has the skills to partner with us on this little baby, but I digress.

Someone went through the process I described above, and took the next step of actually following through. This is what they came up with. And it's not just for sale on the internets - Bakerella found this product for sale at the gift shop at the General Mills HQ.

This could be my second favorite sheep herding movie

I just noticed that HBO has made a movie based on Jon Katz's book, A Dog Year. Looks like it premieres this coming Thursday night.

I first found Jon Katz when he was writing the "Heavy Petting" column on www.slate.com. Several years ago he rescued a border collie with issues (is there any other kind?) about the same time Katz was going thru his requisite mid life crisis. When he figures out that neither of them is going to survive in suburbia, he moves to the country and gets a flock of sheep (which is exactly what I want to do when I have my mid-life crisis AND win the lottery. Right after I buy the big RV and hire a handsome driver named Rico - but that's another story.) Anyhow - that's what the book was about.

Jeff Bridges (who could also be my RV driver) stars and the preview shows him going ass over teacup in a herd of sheep. I have set my DVR.
Posted by Janet at 11:08 PM 4 comments:

Spencer and I took a trip over the river and through the woods to Jeri's to visit with the puppies and Heidi, Sue and Dixie today. Here the pups are enjoying lunch. 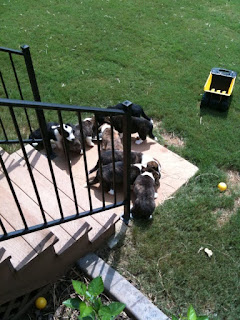 It was quite a pleasant day (especially in Alabama in August.) We sat out on the deck and enjoyed lunch and conversation. Here is Miles telling Spencer all about it.
Posted by Janet at 7:06 PM 1 comment:

My great niece Avery just had her third birthday party. Here is a link to her aunt's blog entry of the day. I just had to share - indulge me some great aunt love.
Posted by Janet at 9:58 PM 2 comments:

Purina can keep their scoops at groups 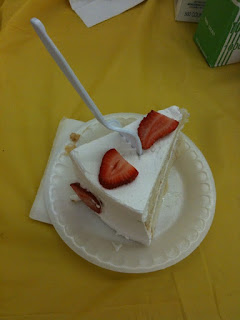 The Atlanta showsite has the best food evuh!
Posted by Janet at 2:18 PM 6 comments:

They did me proud 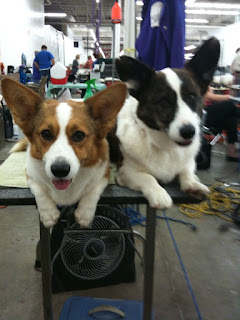 Scout went BOB and Spencer doubled Q'd in Rally Exc B and Adv B for his second leg toward his RAE3 title.

This was a special win for Scout. Atlanta is my favorite show site. This was the first time to win here and was something I has always dreamt of doing. My only regret is that my travel posse is not here with us. On the other hand, that means I get away from here cheap because I don't have to buy margaritas for Laura, Jeri and Heidi.

Spencer was nearly a golden retriver corgi today, scoring 97 in Exc and 94 in Adv. He went in the ring completely cold - we haven't practiced a bit in months. I cost him 3 points on the left about turn. My command on that is "get around me" as I turn into him and point towards my right foot.  Today I just said "get around" (no "me") and pointed more towards the sign. So - he did exactly what I told him to do - he walked around the sign.  Boy deserves a better handler!
Posted by Janet at 12:22 PM 9 comments:

Or, what to do when your dog dryer blows up.

This evening Cheryl and I sat around the showsite telling tales. She was telling me about how when she was showing Jojo at Crufts a few years ago, her dryer caught fire. She was not grooming at the showsite; she was grooming at the inn where she was staying in a small village near Birmingham where the show is held.

She walked down to the local hardware store and told them she needed something that blew forced air. The owner of the shop thought about it a minute, then said he thought he knew something that might work. He went to the back room and brought back a leaf blower with a broken nozzle (or whatever you call the business end of a leaf blower.)

Cheryl took the leaf blower and a roll of duct tape, then went back and taped the hose from her dryer to the leaf blower, and voilà - she had a dog dryer!

Just thought I would pass along just in case!
Posted by Janet at 9:47 PM No comments:

Another day at the dog show 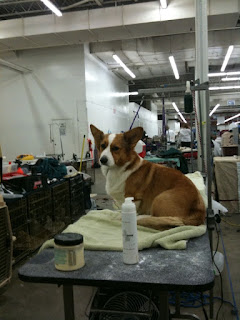 Miss Scout must be about six weeks from going into season because all of a sudden she has gone nekkid.

BTW - whoever programmed the iPhone predictive speller is not from the south. It tried to change "nekkid" to "Nellie."
Posted by Janet at 1:14 PM 5 comments:

. . . at the end of the day than to sit on the sofa with one dog snuggled close with her head in your lap, and the other dog spooned up against her with his head resting on her shoulder?
Posted by Janet at 9:19 PM 4 comments:

Sent from my iPhone

The pack is back

Scout came home last night from a short little road trip with all kinds of gifts for me. All of this came from the supported Greensboro shows, where Scout was BOS three days and BOB 2 days. The organizers (I believe headed up by Robin Honeycutt and Debbie Campbell) obviously did a great job in coordinating lovely prizes. I love all the pottery. 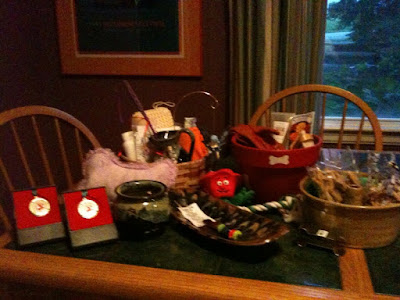 One basket had a fairy theme. We now have our own magical fairy wand and a small vial of fairy dust, which we will be using to cast spells on all those judges who need a little help. 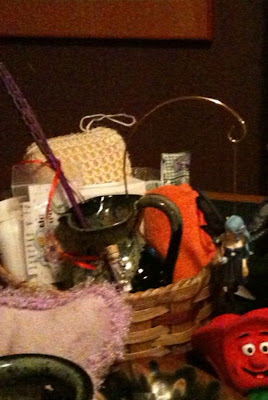 And here is my favorite gift - the reunion breakfast: 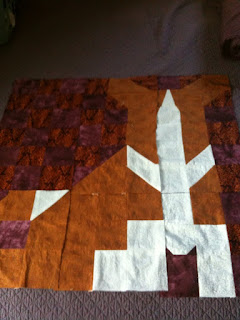 I started piecing a cardi quilt. It will have a red, brindle, blue and
black. I started with the red first because I am missing a certain
little butterbean who will be home tomorrow.

Here is a small quilt I made a few years ago for Spencer to use in therapy dog visits: 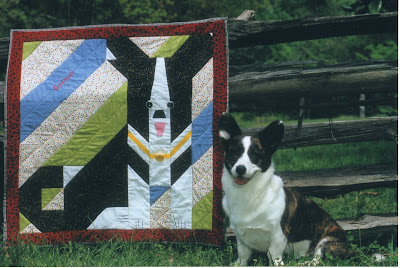 Guess what? Scout is a sable.

OK - all you genetic junkies out there - what does this mean? Any chance of making something other than red puppies? (Not that there is anything wrong with red puppies, but we would love the chance to have a little variety.)
Posted by Janet at 3:57 PM 12 comments:

Oh no! Spencer can never be President:

The weekend was pretty lazy - nothing all that exciting to write about. Miss Scout had a couple of nice wins in Salem, VA, but I was not there to see them, so not as much fun, and I am missing the little butterbean.

I did go to the movies - "Funny People." I knew it was a Judd Apatow movie with his usual suspects - but what I didn't know and was not prepared for - it's a drama, not a comedy like we have come to expect. And is it just me, or was does Seth Rogen look odd after losing weight?

So, just trying to come up with something to post - here's a stupid pet trick: Spencer drooling on the sofa until he gets the magic word.