Cinderella at the Halloween Festival

Avery wore her Cinderella dress to a Halloween festival last weekend. Her grandmother sent me this picture - looks like I made it about 3 inches too long and they had to do a quick make-it-work hem job. 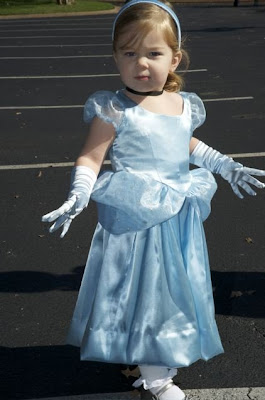 Her mom reports that when she arrived at the festival, she kept calling out, "Charming, Charming" looking for her prince. I'm sure her dad was thrilled by that! 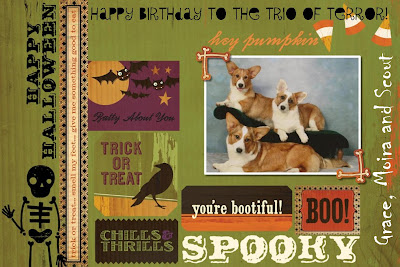 These little pumpkins and their two other littermates, Fanny and River, turn three on Halloween.
Posted by Janet at 10:17 PM 3 comments:

I have slid over the edge

Confession time. I overslept this morning and was rushing around getting ready on a day that felt more like January than October. Since it was cold out, I decided that I would have to dry my hair before I left, rather that doing my usual lazy way out - driving with the windows down and fluffing it out with some product in the car (so glad I have violently straight hair and a stylist who gives me a cut that suits my lack of desire to style.)
Anyhow - I was about to head back to the bathroom and drag out my hairdryer when I noticed I was right next to the grooming table and spied this:

How Cute is This! 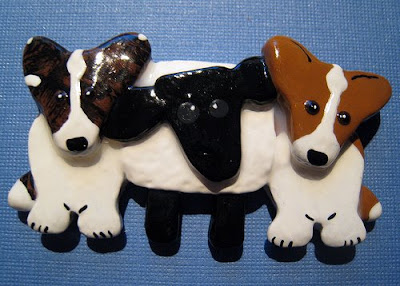 Emily of Dreameyce did a custom creation of Spencer (see the distinctive ears) and Scout. I love it!

Check out her Etsy store here.
Posted by Janet at 8:54 PM 5 comments:

Double Q and a Title for my best buddy 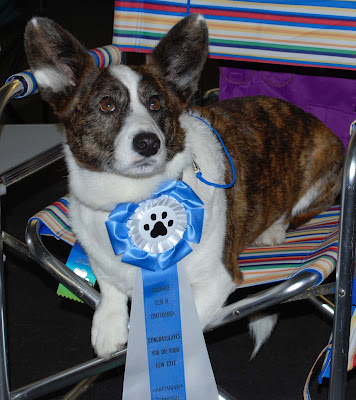 Spencer turned in two beautiful runs today to finish his RAE2 title and we made it home with his new title rosette intact. (He shredded one just like this two years ago when he finished his CD.)

Prior to last weekend, Spencer had not practiced or competed in Rally since the Specialty in April. Regardless, he went out there and did everything I asked, tail a-wagging. What a good boy.
Posted by Janet at 4:03 PM 6 comments:

I Love This Kid

The Kid I'm talking about is this Dad. This is my nephew, Neil. I was a teenager when he and his older brother, Eric, were born. I always lived near them when they were growing up and spent a lot of time with them. I helped their mom and dad (my brother) out whenever I could, babysitting and running them around to sports practices, ball games, movies, whatever. 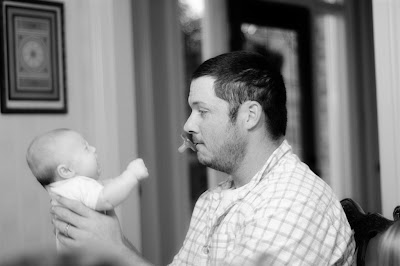 As a boy, Neil was a gifted athlete and a good student. At age 6, he was a state champion swimmer. He played all sports - baseball, basketball, football and track/field. He is still the county record holder in discus, and played Division 1 college football as a quarterback.

One day when he was just a boy, maybe 10 years old, I asked him what he wanted to do when he grew up - did he want to be a professional athlete? He just smiled and said, "I want to play football in college, but after that, I just want to have a job I like, get married and have a family." I remember how touched I was by his seriousness at such a young age. 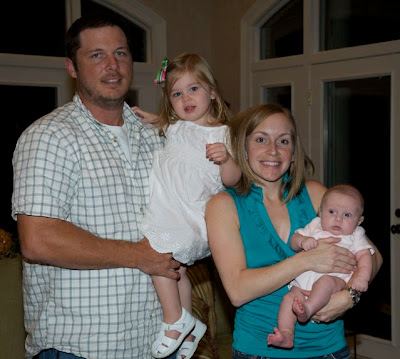 When Neil was in the fourth grade in Memphis, there was little girl in his class named Lindsey. She liked Neil so much that she wrote in her diary that one of her goals for the school year was to get Neil to be her boyfriend. Apparently this wish did not come true that year, and after the school year ended, Neil and his family moved to Georgia. After Neil graduated from high school, he returned to Memphis for college.

One day, Neil and Lindsey ran into each other in a parking garage at school, and those old sparks flew again. Lindsey finally got her wish, and they dated throughout college. Neil graduated with a degree in business, and on the night Lindsey graduated a semester later, Neil asked her to marry him. Neil went to work building and selling houses, and later became a general contractor. 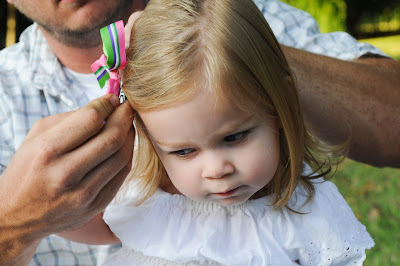 One night before just before he got married, I was in Memphis and Neil and I went out to dinner. I reminded him of that conversation we had when he was 10 - and I told him he was a lucky man - he was living his childhood dream. We both had tears in our eyes - he said he couldn't believe how lucky he was.

Now he has two beautiful daughters, Avery and Dana, and he is just such a Dad. I love just watching him with his girls. 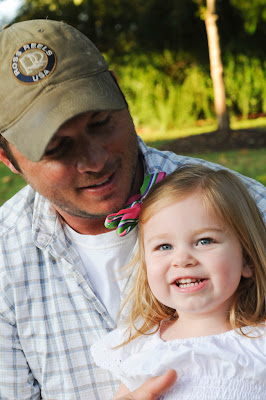 I was playing with my new camera at the show Friday, trying different settings. Not sure what I was trying here, but I kind of like the ghost judge! 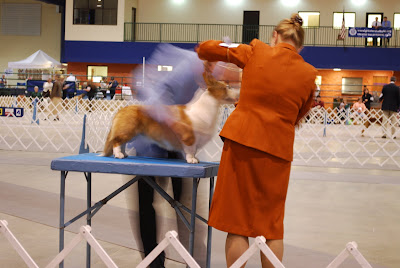 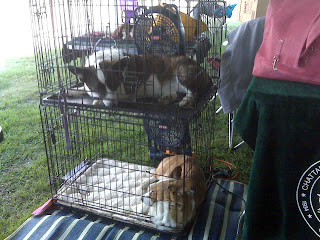 The show changed sites today from the arena in Southaven to Shelby Farms, where conformation is held outside and obedience is in a building a hike away.

Spencer got his 19th rally double q today - not as pretty as yesterday, but both runs in the placement ribbons again. We may run for practice tomorrow, but probably won't. We're planning to finish his RAE2 at our home show next weekend where we have fabulous new title rosettes (it's all about the bling, you know!)

Scout went BOS after showing not terribly well. She rarely shows outside on grass, and she didn't like the heat and she hopped in the grass. On the bright side, breeder-judge Deborah Anthony was very complimentary and said it was a tough decision and could have easily gone the other way.

Spencer was rewarded with 3 runs in the doggie fun zone. 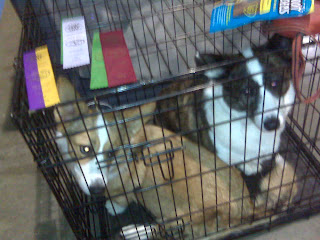 First of all, this blurry pic was made on my crackberry, not my new toy. I feel this blurry. We left CHA @ 4 am and ran in the site just in time for me to walk the Rally Exc ring. Spence got his double Q and got colored ribbons in both classes for his 18th RAE leg. Scout then got BOB. Maybe now I'll go get another crate so they don't have to be smushed while we wait for groups.
Posted by Janet at 12:11 PM 3 comments:

Is Show Frog long for this world? Can he survive yet another surgery? Note the mangled left eye which was the last injury sewn up.

Show Frog came to the family when Scout won her first major in Greenville, SC. Since then, Scout has snuggled with him at many dog shows. He accompanied Scout on her road trip this summer on her tour of dog shows. Cheryl said that Show Frog comforted her as she got acclimated to the life of a traveling show dog.

Tonight I found Show Frog in this state. Is that his windpipe sticking out between his eyes? There are also fluffy frog guts all over my house. As we get ready to head out in the wee hours tomorrow morning to our favorite show in Memphis, I guess I have to add reconstructive surgery to my to-do list. 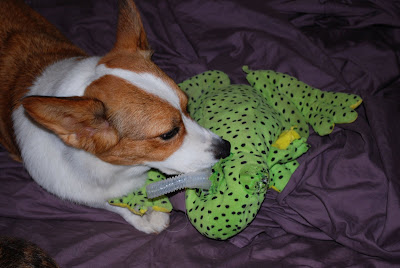 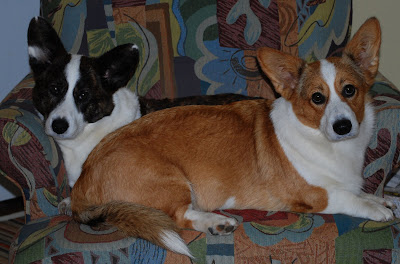 Not much in the way of composition, but great subjects. All I've done is point and shoot - looking forward to getting all arty. 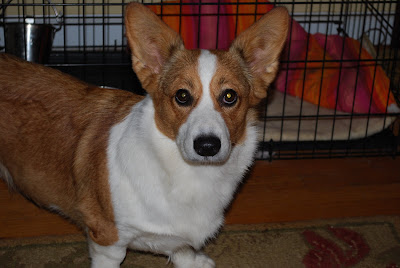 It's Sunday night and I'm piddling on the computer and kinda sorta watching "To Kill a Mockingbird" for the jillionth time. Most of you who know my Scout know that she is named for the young narrator of the story, Jean Louise "Scout" Finch.

Just now Scout the dog was fussing to go outside, barking her deep manly bark. I kept calling out her name to attempt to shut her up. At the same time, Calpurnia, the Finch housekeeper, is calling young girl Scout down for her first day at school. This is what it sounded like:

PS: I just went to google images to get that picture of the original Scout. I laughed out loud when I saw that on page, there are three pictures of my Scout!

PPS: Almost the end of the movie now - my favorite part (from IMBD):

Older Scout: [narrating] By October, things had settled down again. I still looked for Boo every time I went by the Radley place. This night my mind was filled with Halloween - there was to be a pageant representing our county's agricultural products; I was to be a ham. Jem said he would escort me to the school auditorium. Thus began our longest journey together.

(If you don't know what happens next, I won't spoil it for you, but a very young and very blond Robert Duvall has a pivotal role.)

PDX has a Halloween (and Scout's birthday) party every year for dogs and their people. Every year I say that I am going to make a ham costume for Scout - could this be the year??
Posted by Janet at 8:34 PM No comments:

My Soon to be New Toy

I have been wanting a digital SLR for quite a while. I have done a good bit of cyber-shopping and drop in BestBuy from time to time to play with the display models. Here's the camera I have decided on: 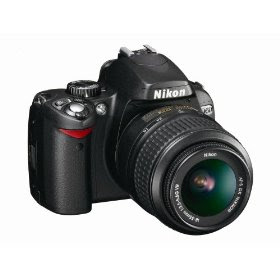 This is the Nikon D60 - a low-to-middle of the line camera, but probably with all the features that I will ever need. Years back I did a good bit of photography - I used Minolta manual cameras, had my own darkroom, and even rolled my own film. I shot in mostly black and white and actually hand-tinted my photographs when I wanted them in color.

Since digital cameras came along, I have had several point and shoots, but have never been very happy with them. For one thing, if I don't have a heavy camera to plop in my left hand while I control it with my right, I can't seem to hold it in such a way as to get a good shot - I tend to wiggle and tip a little camera forward for some reason.

SLRs are finally getting more affordable, and when I found the D60 on sale on Amazon for a hundred bucks cheaper than everyone else, along with free shipping and no sales tax, I jumped on it. (I love Amazon!) We are headed to Memphis for a dog show next weekend - we'll see if my photo quality improves there!
Posted by Janet at 8:58 AM 2 comments:

This would happen at my house.