To see the New Year come in.  We stayed in as usual this year.  We had a fabulous dinner of prime rib, scalloped yukon gold potatoes with blue cheese and bacon, steamed asparagus and these tasty little gougeres with my favorite cheap red wine.  The cheesecake sampler I picked up at the grocery has not been touched. 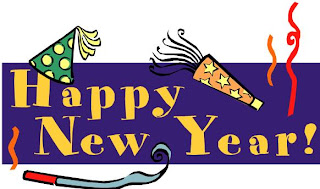 Best wishes to everyone for a happy, peaceful, healthy and generous new year!  Hope to see you all down the road.
Posted by Janet at 11:51 PM 3 comments:

Scout knows just how to curl up around your feet. 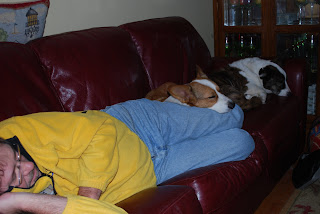 There are many ways to accessorize a princess dress 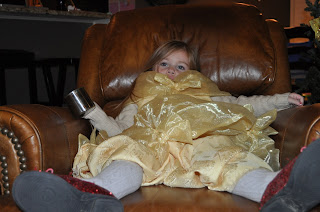 Too quiet at my house

This picture is tugging at my heart.  Cheryl sent it today - she is housesitting in Franklin (about 2 hours away from me) for friends out of town for the holidays, and Scout and Spencer are hanging with her while I have been traveling back and forth across the state.

I thought the timing was perfect for this - Scout is getting her hips checked on Monday by a vet in Franklin who is known for being the go-to guy on getting the best possible film for OFA.  Our family vet did the films on her original test, which came back "fair."  I want Dr B to take a look and see if he thinks that is accurate.

So, I pick the dogs up Monday after I meet Cheryl at the vet - which means that I have two nights home alone - not sure I can stand it!

Scout has spent a fair amount of time away this year as she has been out showing a good bit.  I always miss her terribly, but it is spelled somewhat by the fact that I always have Spencer home with me.

Cheryl sent this picture along and said "See - Spencer is making himself at home" thinking this would make me feel better.  This is not how I see this picture - I see my momma's boy waiting at the door to me to come bring him home!! 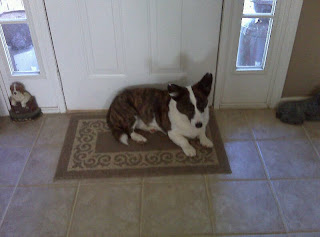 We'll see what tomorrow brings - will I be able to resist trucking over there tomorrow to bring him home and them making another trip on Monday to get Scout???

BTW- I had this incredibly wacky dream last night that I was at a dog show. Jeri (of Allegro Cardigans) and her sister were dressed up like Ninja warriors and were doing all this Matrix-like fight exhibitions all over the show site.  Wonder what I ate that caused that??? 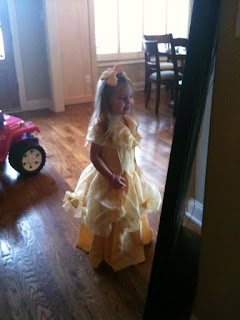 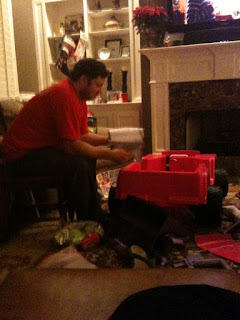 20 or so years ago, I was up until the wee hours Christmas morn
putting together a piece-of-junk Millenium Falcon for a boy. Now it's
his turn to put together a pink Barbie Power Wheels jeep - the circle
of life goes on.
Posted by Janet at 10:56 PM 3 comments: 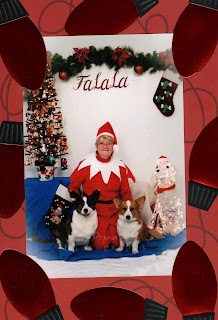 This showed up in the mail today from Doggie Day Care.  Santa's helper is our good friend Nancy who has been a lifesaver in helping me out taking care of the dogs - she lives nearby and will bring them home from day care for me when I have to work late or have to make a trip to visit Mom.

I hope everyone has peaceful holiday - Merry Christmas, Everyone!

The princess dress that nearly did me in 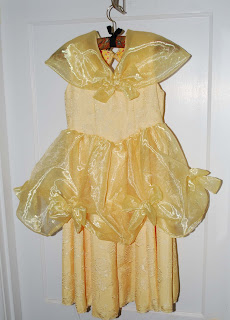 I had promised three year old Avery a princess dress for Christmas.  For a while, I was not sure which one of us would survive, but I finally won.
Posted by Janet at 6:44 PM 6 comments: 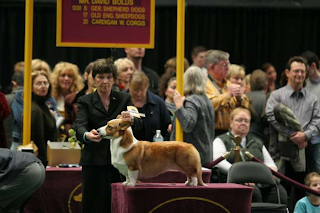 . . . of the Big Apple.  Got confirmation this week that Scout is entered again at Westminster.  Laura and I are going to go up again - we're thinking about taking Amtrak this time.  The Crescent leaves Atlanta in the evening and gets to Penn Station early the next afternoon.

We had a great time last year, even though I was on one leg and 4 wheels  - I had a foot injury and used a knee walker (btw - a jillion times better than crutches - but as usual - I digress.)  If you missed reading about our adventures last year, here are the archives from last February.

Laura and I were talking this morning about how much more fun it would be if we could talk some friends into going up with us.  I have not made room reservations yet, and if we got a few more folks to go, we decided that we could pack along our aerobeds if necessary and make a big old slumber party out of it!  So - is anyone interested in meeting us in NYC??
Posted by Janet at 12:52 PM 9 comments:

Spencer had two party invitations this week.  Tuesday night he was invited to the Chattanooga Brain Injury Association Christmas party.  The problem with parties is that the humans like to eat at parties.  It's awfully hard for a therapy dog to do his job when the humans are eating chicken fingers, especially one as food driven as Spence.

One of the other therapy dog's owners brought some agility equipment.  She set up a few jumps and a tunnel so that the agility trained dogs could entertain a little.  Obviously, little terrier owners are not as concerned as I was - I was certain Spencer's route would be jump-tunnel-jump-table holding chicken fingers.  I had to reverse the course for my chowhound.

Tonight he was invited to be a reading dog at a local church hosting the Interfaith Hospitality Network.  IHN ministers to homeless families with children, giving them places to sleep in churches along with meals and activities for the kids.  IHN is one of our favorite reading dog opportunities - they are always in the evening which make it easier for us to get to.

When we got there tonight at the appointed time, they were running a little late.  They were just gathering to eat, and what do you think they were eating?  No - not chicken fingers.  Worse.  Much Worse.  They had a little indoor grill and OMG they were GRILLING HOT DOGS.  Needless to say, Spencer was really not in the mood to lie quietly and listen to "The Cat in the Hat" after smelling hot dogs cooking for a half hour.

After a while, we were able to find a room down the hall where a perfectly charming young boy named Marcus read the first chapter of "Because of Winn Dixie" to Spencer.  It was really quite moving - the boy's father was sitting near by and he was obviously proud of the wonderful job Marcus did.  As they walked back to their sleeping quarters, he asked his son if he would read the next chapter to him before going to bed - it brought a tear to my eye.
Posted by Janet at 12:50 AM 3 comments:

Yesterday I posted the iPhone pics - today the pics from the camera.

Here are the handsome brothers Wilson and Spencer. 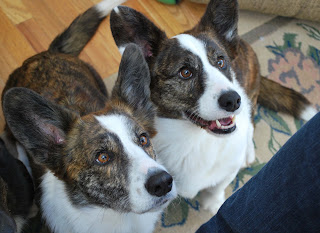 Rudy in the beauty parlor - "hey lady, watch it back there!" 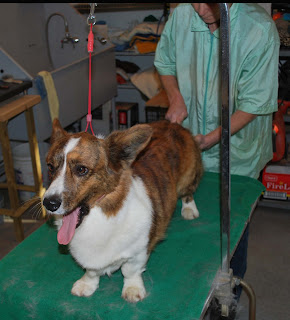 Shirley and her kids. 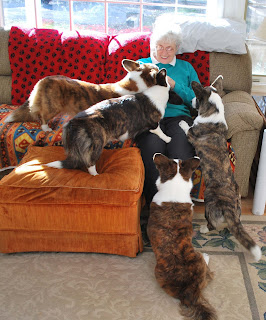 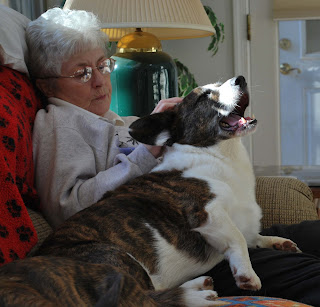 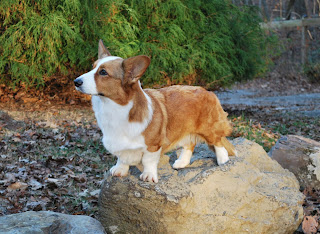 This is what my dogs do to me when I try to pose them for a picture. 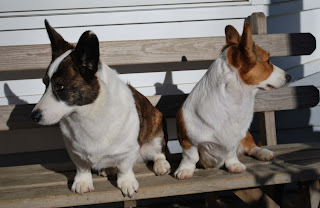 Trip to MD part one

As you may have seen on Taryn's blog, last weekend we loaded up my Element with 3 women (Laura, Cheryl and moi) and 7 dogs (Laura's 5 puppies, Scout and Spencer) and trekked to Maryland to visit Shirley Hobbs.  It's about a 600 mile trip each way - we drove up on Thursday and back on Sunday.  In between, we talked and laughed and ate and drank wine and visited with friends and played with little dogs and big dogs and just generally had a fine time.  We also spent lots of time looking through Shirley's amazing collection of Cardigan memorbilia - years worth of Handbooks, Bulletins and a now-defunct quarterly magazine called "Cardi Faire."

Friday afternoon, Cheryl went into groomer mode and started washing dogs left and right.  Spencer had a Christmas Party date this week, so he became one of her victims. 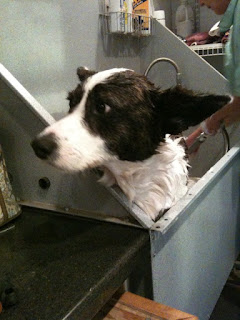 It seemed like he spent most the weekend sitting up, working it. 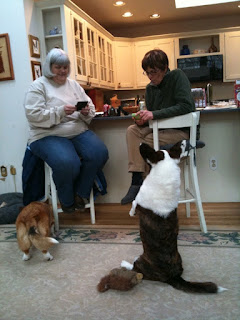 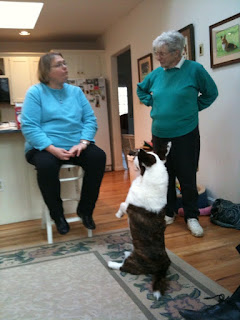 Taryn had fun with the puppies and got some great shots of them - check out her blog. 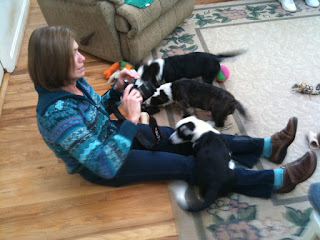 Spence and Scout take a break. 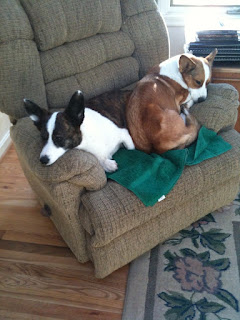 Saturday night we went out for some Maryland crab cakes and enjoyed the Christmas lights on the way. 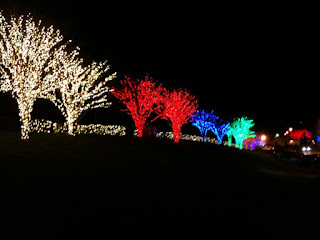 Well - I hope everyone had fun with the Cardi Claus exchange. We had a few packages go astray, and other situations where life just got in the way and delayed deliveries a bit, but I think generally things went well.

Cardi Claus made an unscheduled trip to my house as well - thanks Taryn for the picture frame ornament and ceramic tag which looked alot like a little red girl I know.

Here is a map of how the cardi love went back and forth across the country: 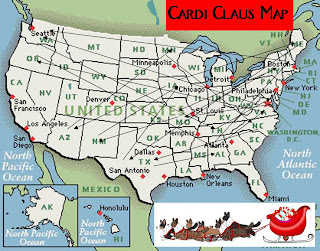 When I first started and training dogs, I realized that most things dog-related just don't seem to be all that concerned about time - a nice way of saying that it seemed like many things dog-related were late for one reason or another.

So - it just follows that old Cardi Claus himself might be running late from time to time as well. So - if you are wondering if your Cardi Claus has forgotten you, or maybe if you are a little late in your own Cardi Claus duties, drop me a line at cardibloggerholidayxchange@gmail.com and I'll play elf and communicate with your partner for you.
Posted by Janet at 8:22 PM No comments:

Back in November, Earth Fare sent me a $50 gift card to give away as they are opening a new store in Chattanooga this week.  I had seven folks post a reply, and the winner is: 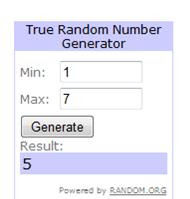 Spencer hates it when I get bored at dog shows . . . 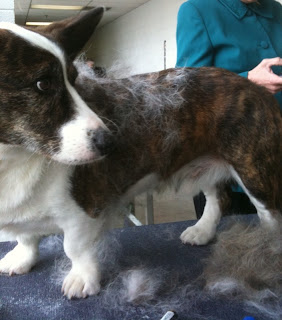 And I drag out Cheryl's grooming tools. We are leaving a pile of
undercoat in NC.
Posted by Janet at 1:15 PM 1 comment: 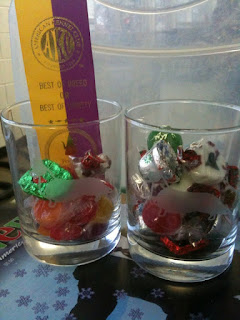 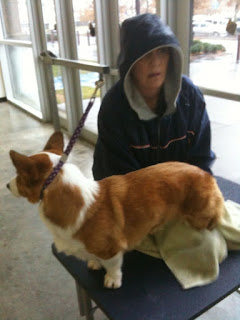 Cold, wet day in Winston-Salem.
Posted by Janet at 12:05 PM No comments: 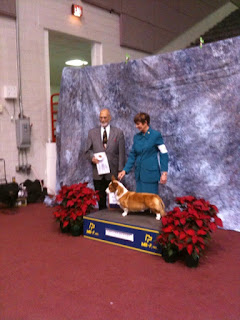 Cardi Claus is popping up all over!

I'm having fun seeing all the cool surprises Cardi Claus is delivering across the country!  (I have a fun little map showing how cardi love is going back and forth across the country - I am going to hold off on it for a few days so as not to spoil any surprises.)

We are in Winston-Salem this weekend for our last show of the year.  We are staying in a nicer than usual show hotel - but I have to wonder about these folks - the bedspreads are lovely WHITE matelasse coverlets.  Their internet access is spotty at best, so I may not find all the Cardi Claus sightings as they pop up - leave me a message if I miss one in the list to the right.
Posted by Janet at 7:30 AM 3 comments: