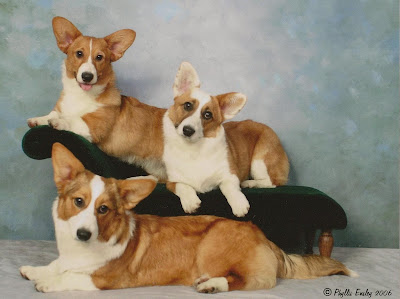 These pretty puppies are Scout and two of her littermates, Grace and Moira. (BTW - this picture has shown up on luggage tags being sold by dog show vendors!)

This past weekend, their breeder, Marla, was at a show with Grace and her owner, Dawn. After the weekend, Marla talked with Dina, who owns Moira, and told her about what a cute and perky thing Grace is - that "if she were human, she'd be a cheerleader."

Dina replied, "That would make Moira a Mean Girl - the kind who writes things on the bathroom walls about who Grace slept with."

Dina shared this story with another Cardi friend of ours, Michele, who wondered if "that made Scout the prom queen who does it all - captain of the field hockey team and valedictorian who goes on to find a cure for cancer."

While I do appreciate that Michele thinks so highly of my girl, and I agree that she is pretty and sweet enough to be prom queen - I just don't thing the rest fits Scout.

She is plenty smart (although thankfully not as scary smart as her buddy Spencer), but I think she would be the type of girl who would bring home Bs to avoid the appearance of looking too smart. And she wouldn't play field hockey - after all, we live in the South! Here, girls play softball in full make-up and with their hair tied back in color-coordinated ribbons. I also doubt that she would cure cancer, but she probably does have all it takes to grow up to be governor of a small state and a future Vice Presidential candidate!!

Marla also said that Honey would be the Mom who would never believe that her girls could ever do anything wrong.
Posted by Janet at 10:03 PM

Yep - that sounds like Scout - Prom queen to the hilt - she needs a tiara.

Those comments cracked me up. Grace was so happy to be out at the dog show last weekend, her tail never stopped wagging and she smiled all day long. And she was wooing at the other cardis occasionally too.

So, can we vote for Scout as VP???? I think she's a MUCH better option!