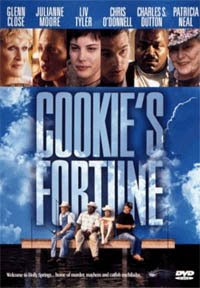 I am on a movie jag here lately. Cookie's Fortune is running on the Sundance Channel this month. It is an offbeat comedy with a great cast, including Glenn Close, Julianne Moore, Liv Tyler and Chris O'Donnell. Memphis music greats Rufus Thomas and Ruby Wilson have funny cameos as honky-tonkers.
I love this movie. I didn't see it when it first came out, but happened upon it several years later. The movie is set in Holly Springs, MS where I spent a good bit of time as a kid. We camped several weekends a year at nearby Wall Doxey State Park, and we would stay there a few weeks during the summer while my Dad worked out of the Pepsi Cola distributor there.
I have lived in three distinctly different parts of the South in my life. Non-Southerners tend to dump us into one big hasty generalization, but the different parts of the South are very different - different speech patterns, traditions and biases.
I currently I live in Appalachia. Folks here are as likely to use "you-uns" as they are to say "yall." I would guess it is probably the most homogenous in terms of race and culture - very conservative and white (mostly scotch-irish). Before I lived here, I was in the Atlanta area for a couple of years. Atlanta itself is very diverse, as would be expected of a large city. But once you are outside of the city limits, the metro area is a combination of suburban sprawl and small town communities - new South and old South.
But my homeland is the area where this movie is set - the Mid-South. I think Robert Altman has captured the Mid-South perfectly. Every character is remininscent of folks I either knew or are related to, most of whom are crazy as junebugs, which is probably why I enjoy this movie so much.
Posted by Janet at 1:46 PM

Thanks for the tip on the movie. I'm always wondering what to rent when I get to the Movie Gallery.

if you gre up near Mmephis, you will love this internet station