I enjoyed reading Jeri's and Kristine's descriptions of their cardis, and couldn't resist chiming in. It also gave me an excuse for making "Obamaicons" for them. 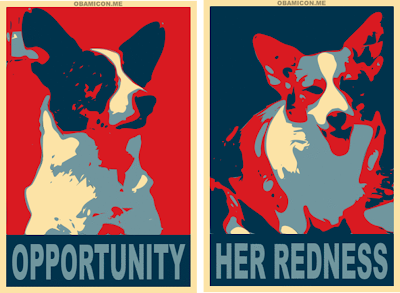 Spencer is my first cardigan. He came to me at 8 weeks old and it was quickly evident that he was going to be a handful. Scary smart, he could get into trouble quicker than I could think. He started obedience training at 10 weeks so that I could learn how to handle him. I think that this early basis in training has really cemented our relationship - he's still a handful, but we communicate well. I chose "Opportunity" as his motto on his poster, because he is always looking for a way to charm his way into getting what he wants.

Spence is both dog's dog and a people dog. He has more charisma than should be legal and he knows how to use it. At our doggie daycare, the owners often use him to greet and "interview" new dogs. The only issue I have ever seen him have with other dogs are when he meets GSDs on leash. This stems from an unfortunate instance at an obedience class when a woman could not handle her nutty GSD and the dog came after me for some reason. Spencer would have tried to take his face off if I had not been able to get control of the situation, and to this day, he does not trust a GSD on a leash.

He excels as a therapy dog. Everyone who meets him in the hospital seems to think that he loves them more than anyone else - he has a way of pulling people in. He is amazing with non-verbal patients - there is a line of communication there that has brought me, caregivers and health professionals to tears on more than one occasion.

On the other hand, he can be a real stinker when he sets his mind to it. One morning when Carlton decided he didn't want Spencer in the bed with him, he moved the stool that the dogs use to get up on the bed away. When Carlton woke up, Spencer was lying on the floor looking at him, and Carlton's glasses, which had been one of several items on the nightstand, lay next to Spencer, chewed and mangled beyond repair. (You think he got his point across?)

In the obedience ring, Spencer can be a golden retriever corgi when he wants to, or completely give me the paw. Spencer has already been rock solid on sits and downs, but once in Open Obedience (where he just gave a dreadful performance in the exercises which he practiced perfectly just days before), after I left the ring during sit, Laura says Spencer found her in the crowd and gave her a look like "watch this." He then looked right at the judge, and laid down.

Spencer often looks at me as if he pities me because I am just not smart as he is, but he is the dog of my heart and I cherish the opportunity to share life with him.

Scout came to me at 4 months old, after living with her breeder and several other dogs. I was skeptical at adding another dog to our pack, but Spencer fell instantly in love with her. She is such a girl - sugar and spice.

Speaking of spice, around other girls, her Red Bitch side comes out. This was something I (obviously) never had to deal with when it came to Spencer. Spencer gets along with just about all dogs, except for the above-mentioned GSD on leash thing. Scout, on the other hand, thinks that she should always be recognized as the top bitch, and I often have to remind her of her place. She also likes to play rough and tumble, so sometimes even when she is not intending to show her redness, she can be overwhelming to other girls.

Her red-headedness also shows up in her outlook on life. Every day is party. She'll do anything in the world as long as it's fun. She loves being outside, regardless of the weather. She, like her sisters, has strong herding instincts, and I hope we get to put these instincts to work in the coming years. In the meantime, she is perfectly happy to herd squirrels, or more recently, Cheryl's herd of Brittanies.

On the sweet side, she is the best snuggler, and I am really missing her while she is getting ready for the big show. She is always so excited to see me when I walk in the door at the end of the day.

Scout has spent way more time than I intended being a show dog. While she has picked up Rally and Herding titles, as well as an agility leg (after only about 3 weeks of training!), I am looking forward to working with her more in the performance rings.
Posted by Janet at 12:52 PM