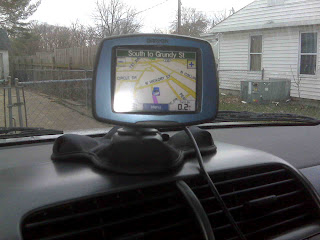 Do you know my friend, Gail Garmin? Gail had been my faithful travel companion and indispensable partner while traveling to dog shows. With Gail's help, I was able to find a Starbucks in any town, as well as several little out of the way quilt shops. Many times, I accused her of leading me astray, but more often than not, she knew the way better than I did.

Last fall, on the way to Concord, SC, Gail suddenly had a circulation problem. Laura was able to revive her a few times, but only for a few brief moments, and somewhere between Lawrenceville, GA and the SC state line, it appeared that Gail had passed on the great GPS graveyard. I pulled over at the nearest exit and activated the ATT Navigator on my blackberry, but it just wasn't the same (and way too expensive!)

Over the last few months, I just did without GPS help. Trips just weren't as much fun without my girl Gail. If Laura was along, we took her girl Stella Streetfinder. Then, just as Gail had been afflicted, Stella came down with similar symptoms.

Thinking that maybe Gail's fuse may be the problem, she harvested Stella's good fuse from her bad cord, and on Sunday she performed a fuse transplant to Gail. Gail immediately roused from her coma, and started telling us how to get to Concord, SC again. What a good girl.

I am so excited that Gail will once again be my partner in crime again as we head to Louisville this week.

Sent via BlackBerry by AT&T

I am so glad that my emergency fuse transplant was a success and Gail is back to her old - helpful, if not sometimes arrogant, self!

Okay, you had me worried at first. I thought you were talking about a lady that passed. Oh my! Thank goodness it wasn't, and I'm glad your GPS is back in business. Cute story. I enjoyed it once I realized it wasn't about a human. LOL

Wow! I knew Laura was handy to keep around, but I didn't realize how much. :-) Yay!