Back home again - we had a noneventful (the best kind) trip today. Good to be home.

As soon as we got home, my first task was to crank up the DVR and see Scout's national television debut, because, I didn't admit this before - I missed it on Monday night when it aired. Cheryl called up from her room all excited and told us about it. So today I queued it up and took a picture: 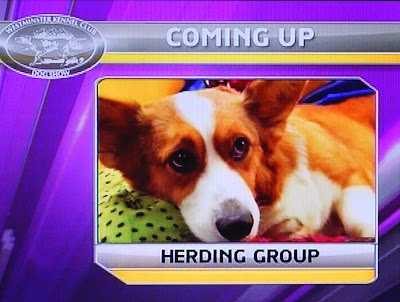 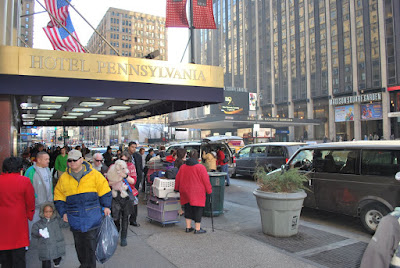 This is actress Julie White (who, as Judy Witwicky in Transformers, uttered these classic words: "You hurt my dog, I'll kick your ass!"). She had watched the cardi judging, and the first thing she said to me was along the lines of "that judge really doesn't like red dogs, does he?" She is a fan of the breed and said that she hopes to own one someday. She talked a bit about filming the Transformers sequel and said there is a scene where she has to run out of the house holding the chihuahua and the pug, and that the pug was so heavy that it wore her out having to shoot the scene over and over again. 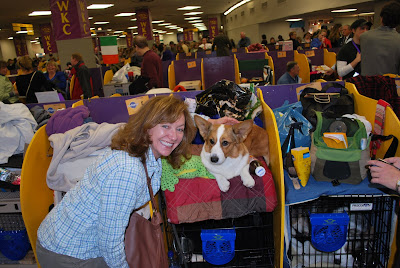 The Empire State Building is lit up in Westminster purple and gold during the show. When you walk out of the Garden, this is the first thing you see. I was really pleased that the moon was in the perfect place for the shot.

Just a shot of my pretty girl in the ring: 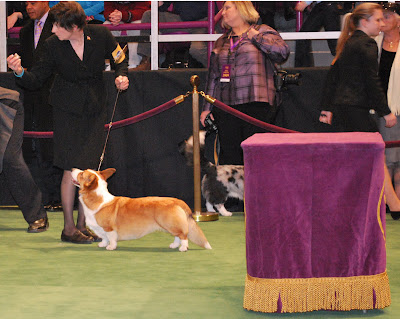 Could she GET any cuter in that shot? Great pictures!

Amazing photos! Thank you SO MUCH for sharing a little of your Westminster experience.

Maybe next year she'll see a judge who isn't biased against the reds ;)

ahhhh, How adorable! Sounds like fun despite the judges.

Great photos! Thanks so much for sharing them.

Thanks for sharing your trip. Scout looks great and shes a TV star now.

Ok, Janet was being nice - she missed seeing Scout on TV the night of the show because I was having a "redneck melt down" looking for my WKC ticket (I found it the next day in my catalog). Scout did us proud and was quite the charming girl despite the throngs of people who just had to pet and love on her.

Janet, I have some photos I took of Scout also, will try to get my photos off the sd card tonight! I don't even know where to begin with all the pix I took around town!!! I thought Scout looked great, no matter what the judge thought! My friend and I cheered for her from the stands. :-)

Love all the Westminster shots. Would love to be there someday.