Corgi Parade: All that obedience training finally pays off! 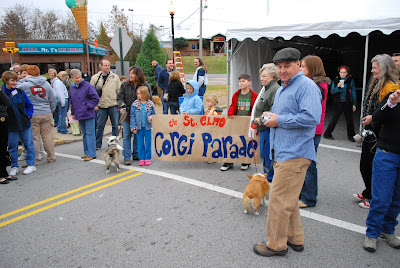 The St Elmo Corgi Parade was this morning, and despite the cold, damp day, the cardis were well represented. Laura brought Lego (black) and Star (blue) so that along with Spencer (brindle) and Scout (red) - we would have all of the colors represented. There were at least 3 other cardis there as well. All the cardis got lots of attention and all of the cardi owners were asked lots of questions about the breed. 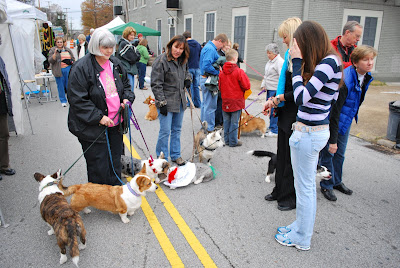 Only one of the cardis was dressed up - but we're not sure what she was dressed up as. Scout seems to be saying, "Hey lady, what did you do to this girl?" 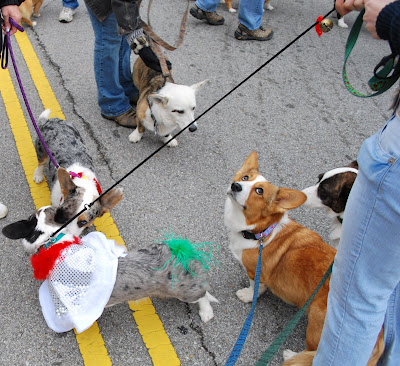 Spencer was named the Most Talented Corgi - and the prize was a basket with 7 one pound bags of organic, free trade coffee and a box of rooibos tea. He did a little sampler of rally/obedience exercises, topped off with his signature move - the Full Twisting Inverted Prairie Dog (that's where he drops to a down from the Prairie Dog position and immediately rolls over - it's always a big crowd pleaser!) 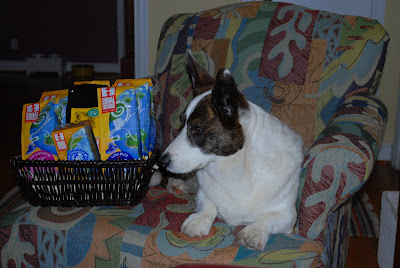 Lego beat out Spencer for the Longest Corgi by a mere quarter inch. Star won the Best Tail award, but Scout says she was robbed and pouted over it all afternoon. In fact, it got a little ugly when Scout hit the "red bitch" button when we got home - Laura and her dogs came over to the house after Laura and I had some mexican food and a margarita. Scout got ugly with Star, so Scout spent the next hour in her crate. 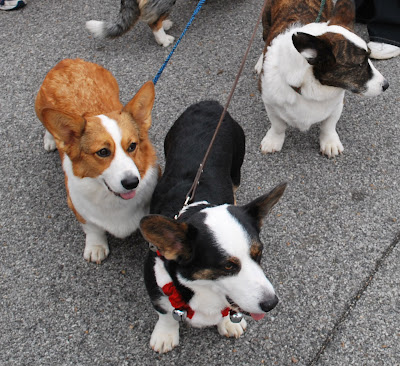 The weather was a bit dreary, but it was a fun day. Hopefully they will have the Holiday in St Elmo festival again next year along with another Corgi Parade.
Posted by Janet at 6:57 PM

This event sounds like a blast. It would be so much fun to do something that had no real wins involved.

I'm really gald you enjoyed the Corgi Parade. My wife and I organized it this year. If you have any suggestions for next year please let us know. Great Pictures! darrenhuntmd@gmail.com