The Corgi Parade is Back! 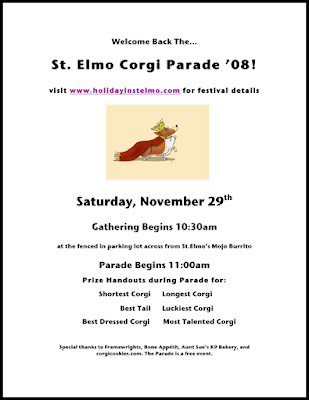 Many moons ago, I went to a little community gathering in St Elmo, TN, a suburb - in fact the first suburb - of Chattanooga, at the base of Lookout Mountain. It was street fair with vendors selling arts and crafts and such. A friend of mine and I had a little booth selling beaded jewelry.

When noon rolled around, there was announcement to clear the street - the Corgi Parade was about to start. I don't know that I had ever really paid any attention to corgis until then, but I was charmed by these short little dogs. There were probably about 25 dogs there (probably all Pems, but at that time I didn't know there two breeds). I didn't have a dog then, but I thought that when I was ready to get one, I would have to consider a corgi.

Five years later, I went to what would be the last September in St Elmo Festival and Corgi Parade. Spencer was 4 month old puppy then, and he won the Best Tail award - ok, he was the only one there with a tail, so there wasn't much competition.

I am so excited that St Elmo has decided to have a Holiday in St Elmo, bringing back the Corgi Parade - see here for info on everything else going on that day.
For you folks not too far from Chattanooga - think about coming to the Festival! Bring the family!

It sounds like a lot of fun. I wish I was closer.

What a great idea -- it's a bit of a drive from Albuquerque, but I'll be there in spirit with three of the corgis with tails. Youl' have to enjoy it for all of us.

Sounds like you will all be having a fun time! Best of luck and hope you come home with lots of prizes :)

There's a similar event in Middleburg VA-a host of corgi owners (pems and cardis alike)-join the Christmas parade. Bobby and I will have to make the trek to TN for St Elmo's one of these days. Enjoy!