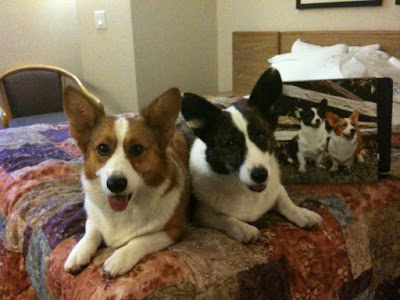 I had forgotten until I saw a display at the dog show, but the 2010 calendar with the pic of S&S (they are Mr and Ms May) is out now! I had to buy a copy. I see it is also for sale on Amazon.

And to be just totally obnoxious with my new toy, here are videos of hotel frapping and wallering. Forgive me - the new will wear off soon, I'm sure.

UPDATE on the weird ring behavior: After the show site cleared, we took Scout back to ring 11. Cheryl took her down and back and around and she flew around the ring like the good show dog she's supposed to be. Not a bit of hesitation or concern. This makes me think that it was not something physical about the ring - more likely a smell or something else in realm of things they see but we don't. I saw the judge later in the day and apologized to her. She said that Scout was not the only one spooked today. She judged pems after the cardigans and she said several of them acted strangely too.

Also, as soon as we got out of the ring we checked her from stem to stern for anything physical and found nothing. She and Spencer have been frapping non-stop this evening.
Posted by Janet at 9:26 PM

I *really* think it was probably a smell. I watched it several times and she wasn't looking in any particular direction, and if it had been sound I think she would have acted way differently, startled. I'm glad to know that she seems fine though!