Showing in BIS wears a girl out!!! UPDATED with the rest of the story . . . 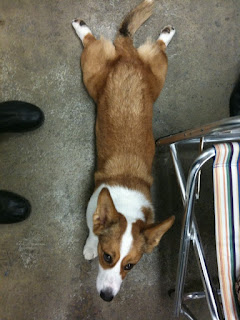 Scout won Group 1 today in Nashville. More later - but video of her in Best in Show ring is on CardiTube - click at right.

UPDATE: Ok - I can type more now. That keyboard on the iPhone wears me out. As I posted earlier, I was working at our club's obedience trial this weekend, so I couldn't go to the Nashville show with Scout. About 3:00 this afternoon, Cheryl's friend Geri calls me and says, "Scout won the group." My immediate response was to laugh and say, "You're lying. How did she really do?" She said that she wasn't kidding, she really won. I was shocked, because the group judge had dumped her in breed just a few weeks ago.

So, the Obedience trial was winding down - we were just waiting for Open B to finish so that we could award HIT. I was sitting there with my jaw hanging open when my friend Nancy walked up. I must have looked up at her with a strange look on my face, because she suddenly looked concerned and asked what was wrong. I told her the news and she started squealing.

Suddenly it hit me that the herding group was the first group in. If I jumped in my car and headed out, I might just make it to Nashville (2 hours away) before BIS. Nancy said, "What are you waiting for? GO!!"

Well, I left, but I really didn't think I would go. I had told my mom I would come see her this afternoon. But then I called Laura to tell her the news and she said, "Let's go! I'll meet you at the interstate." So I called Mom and begged off until tomorrow and hit the road.

Reality set in, and as I started counting the minutes, I knew that chances were slim that we would make it. I was just about to call Geri to see what group they were on when she texted me and said there was a long delay because one of the group judges was still judging breeds. That gave me some hope.

We made it - the last group was almost finished when we got there but we got to see her in the BIS ring. She showed so pretty today - it was worth every minute of the drive.

As a bonus, Laura and I treated ourselves to a wonderful Greek dinner at a really cool little place near the showsite that we had found a few years ago. Usually we eat breakfast there - the best Eggs Bene evuh - which I thought I would get tonight but I went for the stuffed cabbage and zucchini and greek meatballs instead.
Posted by Janet at 6:36 PM

WELL DONE!!! Extra biscuits for Scout when she gets home!

HOW EXCITING! AND AND AND that you got to watch her!!

What a great day you had!!! Congrats!

AWESOME!!!! Scout is really stunning. Watching her at the national, was jaw-dropping. I'd die for a girl like her someday, really awe-striking.

Soak this all in, and all her adoring fans are just waiting for more, and bigger things from this beautiful red girl. She's proving reds aren't 'plain', and sure as heck aren't 'boring', or "Pemmy". I'm so glad you got to see her show in BIS, now I need to go see the video!

WOW! That is so wonderful! You go, girls!

Congratulations Scout, Grace and I are very happy for you guys!