The Ocho Makes a Move

As I have mentioned, the whelping box has been getting smaller as the Ocho gets bigger. The whelping box is right next to my bed, and I like having them there at night. I was kind of dreading having to move them to the big box because that would mean I could no longer have them so convenient to me at night.

Then I had a lightbulb moment. I could go ahead and set up the big box in dining room-turned puppy room, and still keep the the smaller box in my bedroom for a few more nights. Once I wean myself from them, the little box will become the litter box in the puppy room.  Today the pups made their first trip to the big box, and to mark the occasion, they also had their first meal from a pan.

In the dining room, I took the leaf out of my dining table and moved it to the other side of the room next to the sideboard.  I bought a remnant of vinyl and put it down to protect the hardwood.  I lined the walls with ex-pens to hopefully protect the baseboards and wall to some extent.

I already had some eyehooks in the baseboards and door facings from way back when this was Spencer's puppy pen, so I hooked the ex-pens to the eyehooks to secure them. 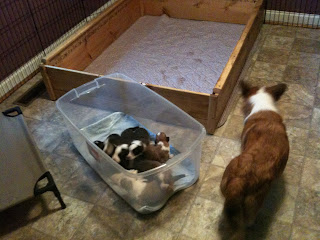 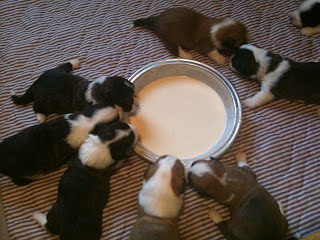 All at least tried it - some ate more than others, but eventually all decided to have Mom for dessert. 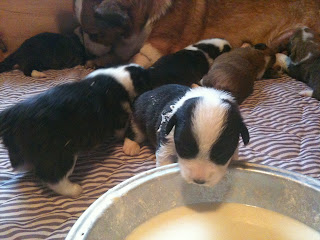 Scout thought her pups were very tasty and cleaned them right up. 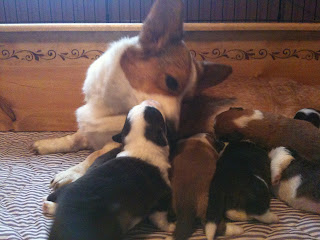 Now they have much more room to motor around - and plenty of room for the sock monkey bed and some of the toys sent by Gramma Penni.  Scout seems very comfortable with the new set up too. 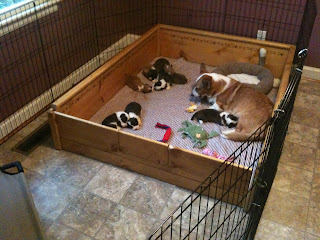 The new set-up looks great -- the ocho does have plenty of room to race around now. In short order you will not want them next to your bed. Mine do serious barking and growling and wrestling. There is no way I could sleep through the racket.

Very nice! I like the way you have their new kingdom arranged.