Catching up with the Ocho - Alli (fka Mary)

On Wednesday, the Ocho will be 4 months old!  I've been catching up with them - and our first featured girl started out as Mary, now known as Alli.  Here she is being loved on by mama when she was one day old. 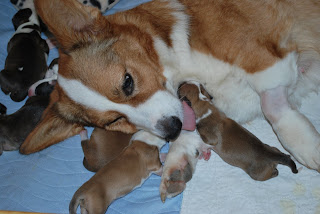 And here she is with her very own girl today: 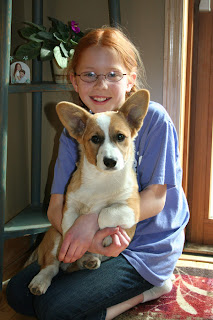 She is getting so big, I can't believe she is the same puppy who flew here!! Madison has been doing a great job with her - I went to check to see if she had lost any baby teeth & she didn't even flinch when I looked at her mouth (one of the "assignment's" we gave Madison was to get her used to showing her bite) - she is confident, personable...& still a spitfire :) They told me she is also quite the herder - they have a few chickens & apparently Alli has been herding them all over the yard - to the point that sometimes the chickens come up on the deck just to get away from her :) Apparently when the chickens stop, so does Alli & just waits & watches - I told them that both of her parents were A1 herders...& that they should get her some ducks :)

Once we get back from the National, Madison & Alli are going to start taking handling/showing lessons from Mackenzie so that Madison will be ready to get back into the Jrs ring this spring, & so Alli will be ready to hit the show ring this summer, & maybe even be able to be Madison's Jrs dog once we breed Jenna. 4-H obedience classes start in a couple of weeks, but unfortunately Alli is too young, so Madison is going to do this year with one of their other dogs & use what she is learning to start Alli on some obedience basics - & then by next year she will be able to do the classes with Alli.
Posted by Janet at 9:29 PM

Oh my gosh - that's MARY??? You're right, I can't believe that's Nick's sweet little sister. What a beauty she is!

Nick is happy she has her Very Own Girl. He says they are so much fun!

Alli looks lovely and her girl looks VERY happy! Can't wait to hear about their adventures!

Alli looks lovely and her girl looks VERY happy! Can't wait to hear about their adventures!