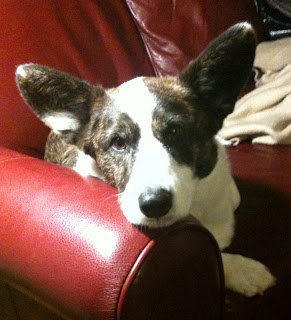 This is the dog formerly known as Spencer.  He wants everyone to know that he is not happy.

He doesn't like the fact that it is very cold outside - not that he spends all that much time out, but still, a boy gets cold doing his business.

He doesn't like that January means that the corporate accountant he lives with has to spend so much time at work doing something called "closing out the books."  He doesn't understand why investors make such a big deal out of earnings releases and he certainly does not think that it is important enough to take away his source of petting and entertainment on a Saturday.

But mostly, he misses his sister (who is freezing her butt off in Florida at an outside show this weekend!)  If I say something about Scout or "sister" he looks at me so pitifully.

So, Spencer wants everyone to feel very sorry for him and send him cookies.

Maybe Spencer would feel better if he knew how cold it was when Zippy goes outside. Like -12 this morning. So far he is still "puppy" enough to want to go out and run around no matter what the temperature. Hope Scout doesn't freeze down in FL. What horrible weather everywhere!

Poor Spence! My guys love the cold! But they definitely would not like it if I had a job like yours that can get so busy and keeps you away from home too much.

Poor Spencer. So mistreated and ignored.

Good luck to Scout! It is pretty cold here but she's such a nice girl I'm sure she'll show like the Ch she is! Spencer will have his friend back soon enough