Puppies get a living space upgrade

On Friday, the vet said that it would be best for Scout if we gave her system a break and go ahead and wean the puppies. I had been putting off removing the big box from the puppy pen because it provided a barrier between Scout and the pups when she wanted it, but now there was no reason not to give the pups more space.

So, we scooted the pups and their big box to the end of the pen and put the whelping box-turned-litter box in. Then we just lifted the big box up and over their heads and all of a sudden it was new world. I wish I had my phone handy so that I could have recorded the mayhem as they ran and tumbled all over the place - it was a hoot to behold. 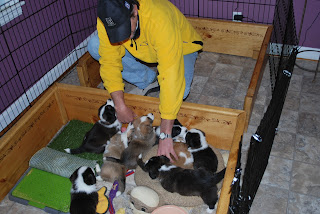 Now they had  more room for more toys. 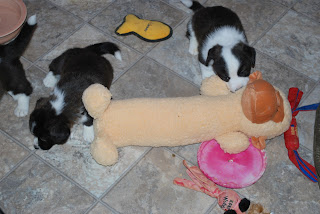 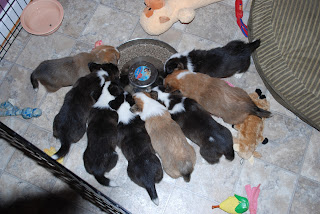 And a big bed to play king of the hill and snooze on. 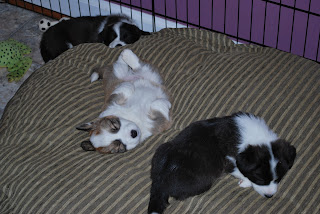 David, Abby and Tommy thought that they still like a crowding together for a nap, tho. 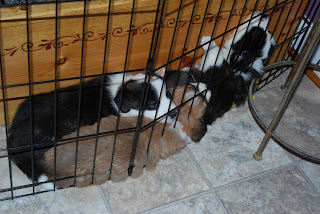 Yikes - that doesn't look like a very comfortable way to sleep...of course, I've fallen asleep on concrete before, so I'm probably not a good judge! Congrats on the new digs, Ocho!

Happy babies with a new playground. If you put in the jungle gym, I'll bet they climb it.

Is that Big Nick in the middle of the bed? Whoever it is, I want to squeeeeeeeeeeze them! Too cute.

Why do they do that? My Quatro do the same thing, I have a little dog house in their pen and they will lay between it and the wall all squished up. I let the babies loose one at a time at Grandmas house (after visual conformation of elimination) and now they want OUT all the time.

Yes Jeri - that is Nick. He is the Golden Boy - everyone gravitates to him.

Is all the work getting to you yet? If so you can sure send a bunch to my house to vacation. They are just darling!