We are getting into a rhythm around here.  Scout is back - the effects of Monday seem to have finally worn off.  She has been running in the front yard, jumping up on the sofa, eating like a logger.  She gave me a bit of scare yesterday evening - she had a long nursing time with the pups yesterday, and afterwards, she slept for hours, and then seemed very droopy .  Her gums were light and something in her face just bothered me.  I looked at the clock and it was 8:30 - our vet is open until 9:00 - so I called them and told them I was bringing her back in.

They felt like we should run bloodwork again.  Doc came back in and said he had good news and bad news.  Good news:  test results were better than they had been in the morning, including calcium back in the range of normal (Yaaaayyyyy!!!)  Bad news: not sure why she so obviously felt bad - but we are just going to count it as overtaxing her system yesterday with the long nursing session.

Later in the evening she perked up enough to steal and defend Spencer's bone: 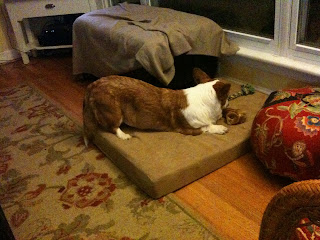 This morning she went in with the pups, but I only put 4 of the pups on her.  She had much more interest in the pups today and went right to licking the heck out the butts - (another yyyaaaaaayyyyy!)  The instinct and willingness is there - we've just got to get her body back in shape. 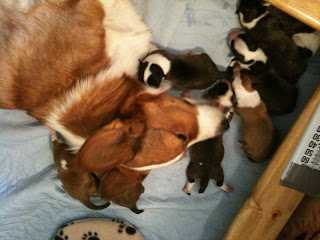 So glad to hear that Scout is on the mend, and starting to take over her Mommy duties! Sounds like the worst of it is over! Hugs!

Thats great that Scout is improving and able to take over some of her mothering duties! Hopefully it will be smooth sailing now, so you can enjoy your momma and babies!

Every day is a relief -- perhaps you will even get a chance to catch up on some sleep.

i'm so glad to hear things are going so much better for you!! I love the puppies LOVE LOVE LOVE them!

Is there a more beautiful sight than fat happy puppies with a loving mommy dog? Makes me weepy!