It's been a long day's night 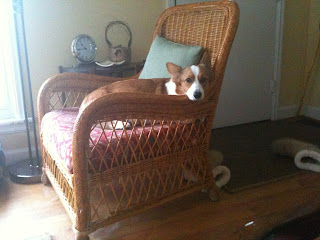 Scout likes this picture - it cleverly disguises her current state. 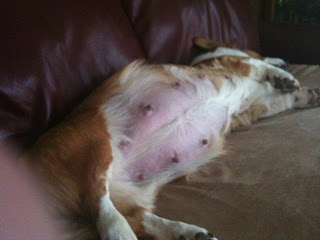 We have had a tough few days.  For a couple of days, the puppies were arranged so that there was no comfy position for her.  She could not lie down more than a few seconds.  She would sit and lay her head on the side of the whelping box when she got so tired that she couldn't stand anymore.  I tried rolling her to her back and gently rubbing her tummy, but she could only stand it for minute or two before she would have to get up.

She had been getting picky about food, so Friday night I got her some canned Merrick's, which she loves.  She ate it, but shortly after threw it up.  Saturday morning she only ate a little, but by Saturday afternoon, the puppies had shifted down and back enough that she could lie down more comfortably.

Saturday night thing got interesting - she started throwing up again, first the little food she still had in her, then water and bile.  Then she had some diarrhhea.  She was shallowly panting and wandering around the house and just generally freaking me out.

I started calling my phone list.  One said she's probably in pre-labor - get ready for puppies, one says no, it's too soon.  But the best one was good friend Laura who said sit tight, and she jumped in her car at 11:00 on a rainy windy night and drove over that mountain and came sat with me.

We all finally got to sleep and today is a better day.  Scout still doesn't care much about food, but has a little nibble every once in a while.  She has much brighter eyes and perky ears.  She has even felt good enough to patrol the fenceline and bark at those outside.  She's got an appointment with the vet at 7:30 in the morning for xrays to count the pups, and I'm relieved that will give us a chance for the vet to give her the once over.

We're spending the rest of the day watching snow flurries.
Posted by Janet at 12:26 PM

Wishing you all the best. The anxiety over not knowing what is happening is the worst. Sending good thoughts to both of you.

Poor scout! A corgi that can't eat is just wrong in so many ways...

I love the pic of her in the chair. It reminds me of how TV shows handle it when an actress is pregnant, but her character isn't. Always filmed behind a counter, or with a bag in front of her...

We are sending Scout all our healthy mom and baby and easy whelp thoughts. Grace says she wants Scout to know that its all worth it-babies are good till they get teeth anyways.

Good friends are wonderful to have close! Praying for a healthy mum and litter. Everything will be fine!

Poor Sister Scout. Don't tell her the erstwhile baby-daddy was in Winston-Salem this morning trying to put the moves on Scout's younger, red-headed aunt. Family loyalty kicked in though and Georgia told Chase to take a hike :)

Poor Scout, this part will be over soon. She is huge no wonder there isn't much room for food:-)) You all are in our thoughts and prayers

Oh, Janet, I am so sorry the girl is not feeling well. I cannot wait for tomorrow's x-ray report. Chase says he's sorry. He also wants Scout to know he was not flirting with Georgia -- Georgia is making that up.

Poor Scout...I have to agree with Lani that a corgi that can't eat seems like nature's cruelest joke ever. Hope you guys have a better day today, looking forward to seeing some Scoutchas!

Poor Janet and Scout! My thoughts are with you. And (head hanging in shame), I am sorry to have to admit that the Chaseman WAS being a DOG, and WAS attempting to flirt with Scout's auntie . . . he's really, really sorry, tho!

I'm so sorry for poor Scout! :( I hope she's more comfortable now...can't wait to hear about the x-ray and hope the vet says everything looks good. Many, many good thoughts your way.

Lindy says, Scout hang in there, they will be out of there soon and you will feel better. Plus you get to eat a LOT once the babies show up. Good luck and safe arrival.